Update on the LMS malfunction

I tried emailing students daily what we did in class and what the homework is. I also placed important due dates for them. Tried to make it as clear as possible…once again…to me. We found out in class that no one reads their emails. So here I am, learning Google classroom right along with them. I made a classroom for each Physics block during my lunch. Some of the students are giving me pointers. My homework this weekend is to learn Google classroom. Any help is welcome.

It actually turned out way cuter than the previous class indicated. Students really put in a lot of work into their introductions. So much so that I think I might start each class by playing the video of their slides. Because they have their first and last names on it, I don’t think I can embed the video. However, students were looking around the room to see who the person was…and then yelling across the room to ask about the thing that they shared in common. My objective of the freshmen getting to know each other was met.

We had students work on the Physics Invention Tasks: Popcorn Popping Index, Fastness Index, and The Steepness Index. We talked about showing students that an index is really a unit rate. They struggled through counting. Every year I forget that I have to tell the students that the individual tick marks makes up a block. It’s not a big deal, but it does add a great deal of frustration to their learning. I think I’m okay with giving them that much information. We put the follow-up questions on a separate page. I think that maybe we should just include it in the already large packet, or keep the questions together. I didn’t like the logistics of the students having to move between the worksheets. More than one packet seemed to be a bit overwhelming. 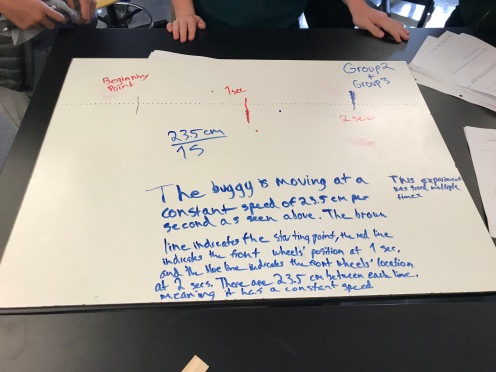 Group made a mark for every “Mississippi” and found out that the marks are equidistsant.

Our first official board meeting!

Students transferring the discussion of rates into this activity.

Is the buggy moving at a constant speed?

This is my third year doing this curriculum. The first two times I did it, it didn’t work so well because I forgot to give the students the buggy. Since the students were genius, they figured it out anyway…we just took a lot longer. This year, I let Block 4 use their phones as timers AND the buggy. I saw a lot of Instagramming…but not of Physics. So the next two blocks, I took away their timers. Bonus: they were able to get the concept better. The majority measured their buggies to go from starting to a point and seeing if it did that every time. The minority put a tick mark for every “1-Mississippi.” Then they showed that the distances were indeed equal. There were quite a few that didn’t understand what we meant, so I’m going to have to go over that next class.

This site uses Akismet to reduce spam. Learn how your comment data is processed.